Two stories unravel parallel to each other, one 2000 years in the past and the other about the IRA in the 1980’s. 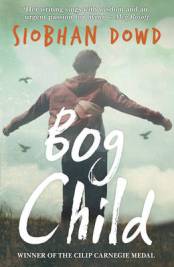 Fergus’ life is complicated; his brother is in prison on hunger strike, his parents are at loggerheads, he has discovered an ancient body in a bog, and Cora has just entered his life. Fergus is also ferrying packets across the border into Ireland and is scared of what the packets might contain.

Fergus is an average teen with dreams of going to university. However, living in an area consumed by a difficult political situation has brought the reality of death to his door. As he discovers love and thinks of his future, he is weighed down by the heartbreak and sadness in his home and the uncertainty in his community. The parallel story of the girl whose body Fergus and his uncle discover in the bog, is also one where politics  dictate the life of a child.

The IRA hunger strikes were of huge importance in their time but, with the peace process in Northern Ireland and the growth of terrorism in other areas of the world,  many young people today will be less aware of them. This is therefore an excellent book for stimulating discussion not just about terrorism but also about how peace is possible and whether the means used to achieve it are worth it.

A trailer for the book can be watched here.