Anna and the French Kiss by Stephanie Perkins

Anna’s father has decided that Anna should spend her last year of school boarding in Paris. Anna doesn’t want to leave her home, her family, her best friend and her potential boyfriend behind, but she has no choice. As she adapts to life in Paris and makes friends she meets Etienne St.Clair – a popular and charming boy. As their friendship grows, Anna wants more but Etienne St.Clair has a girlfriend and keeps sending mixed signals.

This is an lighthearted and enjoyable read. The characters are fun and Anna and St.Clair’s relationship is full of ups and downs. Paris is a lovely setting for a young romance.

There are two more books in the series:

Lola and the Boy Next Door – Lola likes to design costumes and she likes them outrageous and different. Her rocker boyfriend is all part of the image. However when Cricket Bell moves in next door, Lola finds herself struggling with her feelings for the unusual boy. Another lighthearted, fun read, although I found myself less engaged by the characters in this story. It was nice to have a glimpse into Anna’s life after Paris. 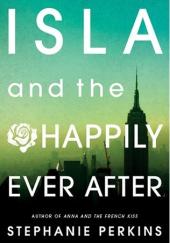 Isla and the Happily Ever After – this is the final book in the trilogy, set in New York, Paris and Barcelona. It follows the love story of Isla and Josh and you’ll get a peak into the lives of Anna and Lola too.