The story follows the fate of four bands and their members. As the first book in a four book series, the author introduces us to the different bands, their members and their families. There is a lot of talent but also plenty of dysfunction; with difficult characters, tangles with the law and some very large egos. In London, Jay is kicked out of the band, Brontobyte, by his friends Tristan and Salman. He then creates a new band, Jet, with two of his brothers Adam and Theo and a new kid at school. In Dudley, Summer finds herself singing for the band Industrial Scale Slaughter. Her band mates are the Wei sisters, Lucy and Michelle, with Coco on drums. In Scotland, Dylan gets together with three other teenagers at his school with the band, Pands of Doom. The upcoming Rock Wars reality show is the answer to all their dreams and by the end of the book, the bands are keen to sign up and be considered for a place.

The book is a straightforward read with plenty of action as the characters struggle to establish their bands whilst dealing with plenty of problems at school and at home. Robert Muchamore, well known for dealing with difficult subjects in his Cherub series, does not shy away form including sex, drugs, self harm, ADHD, breaking the law and violent behaviour. There is plenty to keep the reader glued to the page. The book contains a range of interesting characters and, whilst they are not all likeable, they are certainly interesting. The series promises to entertain with difficult characters, scrapes with the law, rampant hormones, family problems and emotional baggage all promising to derail the hopes of the band and their members. 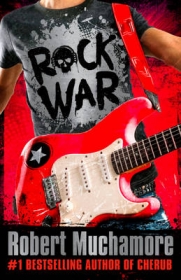 Books2 and 3  in the series have now been published (Boot Camp and Gone Wild) whilst Book 4 (Crash Landing) will be published in the UK in October 2017. There is also a short novel written for World Book Day called ‘The Audition’.