An unusual subject – deftly written about.

This is the story of conjoined twins, Grace and Tippi. When they turn sixteen, Grace and Tppi can no longer afford to be home schooled and have to attend a secondary school. It is a frightening prospect; finding themselves among other teenagers their age, hoping to be accepted but very aware of their differences. However, starting school is only the start of the changes in their lives: difficult and heartrending decisions lie ahead.

An unusual story giving an insight into the lives of conjoined twins – the difficulties they face, the judgments people make, the effect on their families and siblings and the nature of their relationship with each other. The most important thing I took from this book was how individual each twin was and how, even if their bodies were joined together, they were in fact two different people. Thought provoking and interesting, written with the light touches and sensitivity that Sarah Crossan is so good at.

The book has, rightly, been shortlisted for a number of awards. It has won the YA Book Prize 2016 and it is currently on the CILIP Carnegie 2016 shortlist. Just last week it won the Irish CHildren’s Book of the Year Award. 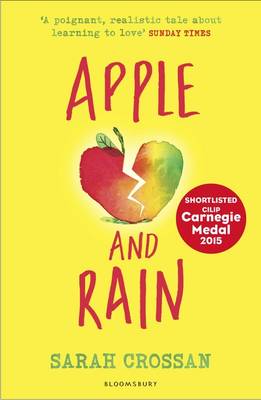 What is it that makes her books so popular? It is a combination of factors – thought provoking and unusual story lines (conjoined twins, relationships between children and adults, bullying), a clear and accessible writing style, an interesting style of writing (The Weight of Water was written in verse) and an underlying story that is strong and populated by interesting characters.

Sarah Crossan has a very light touch hen she writes – her stories make you think and ponder, but at no point does it feel as if you are being lectured or taught a lesson. She allows the story to draw you in and entertain you; thinking about the subject matter follows on naturally.