This was a brilliant event. Michael Rosen had me in stitches and Malorie Blackman was informative, fun, down to earth and inspiring. I’m not going to repeat word for word what she said but here are some points she made that I found interesting: 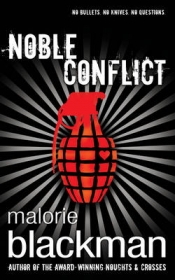 Noble Conflict – her last book – was inspired by the idea of whistleblowers, people who decided to expose wrongdoing in their workplace. I found this interesting as I had been caught up in how the book exposed the dangers of the victors in a war or revolution rewriting history to justify their actions. It is an excellent book and gives the reader a lot to think about and to discuss. There are no plans for a sequel to the book but there may be a prequel. Since Malorie loves fan fiction why not try a sequel yourself?

Malorie discussed her belief in the need for diversity in YA books. This is something that she has discussed before and it important to understand her position – what she would like to see is more books with a diverse range of characters so that society as a whole is represented. That way more children can see themselves in the books they read and more readers can learn about children who may be different to them in one way or another. People are less likely to be prejudiced if they understand and have knowledge. I back Malorie’s view wholeheartedly and have discussed this on the blog before.

Given her busy schedule, there are no new books planned at the moment although she did mention Valentine’s Day as an important date – so keep it in your diary.

One thing Malorie said which I particularly liked was that she believed not so much in happy ever after but in ‘hopeful ever after’ and that is the note on which she liked to finish her books. When I thought about it, I realised I like it when books don’t finish with everything neat and tidy (since life is rarely like that) but leave me with the hope of things being better in the future. Have a think about the books you like – does that ring true for you too?